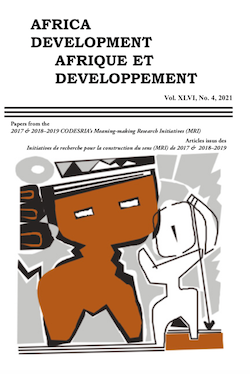 Senegal, a Sahelian country, is facing the negative consequences of climate change, because of its predominantly agricultural economy, which is highly dependent on climatic conditions. This phenomenon inevitably affects agricultural production and the economy, thus compromising food security. In the Matam region, climate change is a significant threat and several facts can illustrate it: the decrease in rainfall, more intense and shorter rains, an increase in temperature, and so on. There are also multiple negative impacts: desertification, loss of arable and grazing land, reduction of water availability for productive activities. The aim of this article is to analyse the impact of climate variability in the region and the different resilience strategies developed by the population to cope with them. The methodology adopted consists firstly of analysing the interannual variability and the arid character of the area. Then the simple random method was used to carry out the diagnostic survey on the resilience agro-pastoral activities. The results showed the inter-annual irregularity of rainfall and confirmed the arid nature of the region impacting crop yields and vegetation cover. The results also showed that agriculture remains largely extensive and marked by the growth of irrigated rice cultivation, with a start of modernisation.